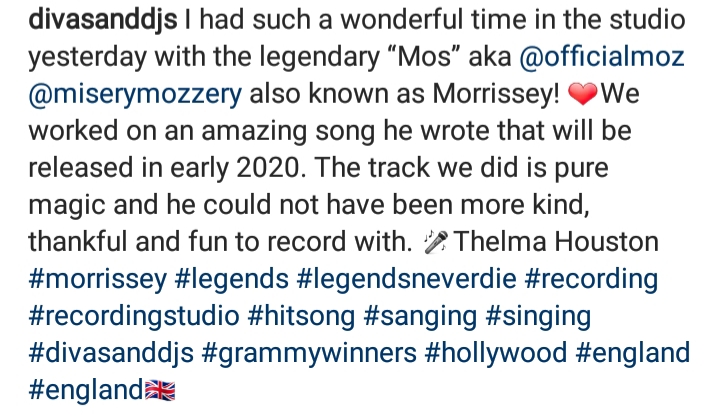 Subscriber
Wonder how she'd respond if she knew his support for racist organisations?
V

maybe she got you lamped as nutter.

Looks like she recorded (or at least sang) a version of Suedehead a few years ago.
www.morrissey-solo.com/threads/thelma-houston.121191/

It's a really nice photo, although Moz is making a bit of a silly face!

Anonymous said:
Looks like she recorded (or at least sang) a version of Suedehead a few years ago.
www.morrissey-solo.com/threads/thelma-houston.121191/
Click to expand...

"Do you still find inspiration in contemporary singers and songwriters? If so, could you possibly share a line from a recent song that has made you consider it at length and come to the conclusion that this person or this act has real talent?

“I think that when you die you might die without ever having been alive,” sings Kristeen Young on “Fantastic Failure.” She’s not wrong.

Stars do a great version of “Asleep,” Jeff Buckley does a pretty, if not too “Hallelujah”-ish “I Know It’s Over” and Zee Avi does a stunning “First of the Gang.” I’m guessing you’ve heard all of these, but is there a cover of one of your songs that has particularly moved you?

Yes, I’ve heard and love all of these versions, but the one that made my head spin for days was Thelma Houston’s “Suedehead,” partly because the British press were adamant that my songs could never appeal to anyone with dark skin. Oh, the comments we’re forced to endure ..."

Regards,
FWD.
Stealing things from the Internet - so you don't have to.
A

Does anybody have a link to the song? Can't find it on youtube or elsewhere. Only that snippet that is still online on the BBC website.

Wonder if the world's music and wider media will pick up on this. Surely the NME will at least.
Be interesting to hear how it's reported, especially the indie websites who had banned all Steve related content.
Nothing out there yet...
A

Why don't you ask her, she's on social media.

"Hello Thelma, I'm Peter. I'm very clever, I won a television quiz and i invented a tea bag. My wife is very clever too, and my kids. I like to show people I'm clever. Is Morrissey a racist?"

I suppose there's a chance she might think you are a bore and a tit.

Perhaps not eh?
A

Congratulations to the happy couple.
A

Chairman Of The Bored

He's not a Rolling Stones fan.

I am putting you on an internet timeout.
M

Sam had indicated in his April interview that he had listened to the "album for 2020." I suppose scheduling Thelma for recording may have been the last few drops of paint for the project.
A

Another day, more tokenism on view? Never!!!!
You must log in or register to reply here.