I am a Ghost

Phil Spector will serve 19 years for murder of actress

Music producer Phil Spector has been sentenced to 19 years in jail for the murder of actress Lana Clarkson.

The 68-year-old, most famous for his 'Wall of Sound' recording technique, was sentenced at a Los Angeles court, following his conviction for second degree murder in April.

The judge sentenced Spector to 15 years to life for second-degree murder and four years for personal use of a gun. The judge is also ordering restitution payments.

Clarkson, 40, was murdered on February 3, 2003, hours after meeting Spector at the House of Blues nightclub.

The actress and bar hostess was killed in the early hours of the next morning by a single gunshot to the mouth in the foyer of the producer's mansion.

Two successive juries heard testimony from Spector's driver claiming Spector emerged from the house brandishing a gun and saying: 'I think I killed someone.'

But his lawyers maintained Clarkson committed suicide. In an magazine interview, Spector said she 'kissed the gun' before pulling the trigger herself.

The jury was unanimous in its verdict last month of second degree murder, as required by Californian law.

Spector was one of the biggest names in the music world during his heyday - he was the producer of countless teen anthems including To Know Him is to Love Him, the Ronettes' classic Be My Baby, The Crystals' Da Doo Ron Ron and the Righteous Brothers' You've Lost that Lovin' Feelin'.

He also produced Ike and Tina Turner's "River Deep-Mountain High" and worked on a Beatles album with John Lennon.

I'm sure some big burly prisoners will make some use of him in the showers.
.....in a snow filled sky, we'll make it all right to come undone.
C

This makes me sad. How can a man who looks like a Bernstein Bear do such a horrible thing?

Hellie said:
I'm sure some big burly prisoners will make some use of him in the showers.
Click to expand...

really?, you think they rape guy's 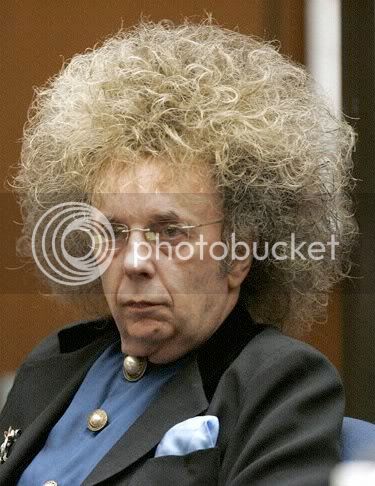 Oh my god said:
really?, you think they rape guy's


The guards will have to frisk his hair for narcotics and weapons after every visiting time.

Oh my god said:
really?, you think they rape guy's

They can call him Curly Haired Sue.

When I was little I used to watch this cartoon called The Hair Bear Bunch.It was my fave after Batfink and Captain Caveman.

He looks like one of the bears.
.....in a snow filled sky, we'll make it all right to come undone.
You must log in or register to reply here.

A
Phil Spector, music producer known for the ‘wall of sound,’ dies at 81

Jan 31, 2021
carlislebaz
C
B
Music: Festive: Do they know the Christmas song is dead? Mr Hankey