A second date has been added, according to Morrissey Official Facebook & Ticketmaster:

Friday Nov. 10th is sold out! Thank you everyone. By overwhelming demand - a SECOND SHOW has been added Saturday Nov. 11. Tickets on sale Tuesday Aug. 29 10am pst. No pre-sale, no codes. 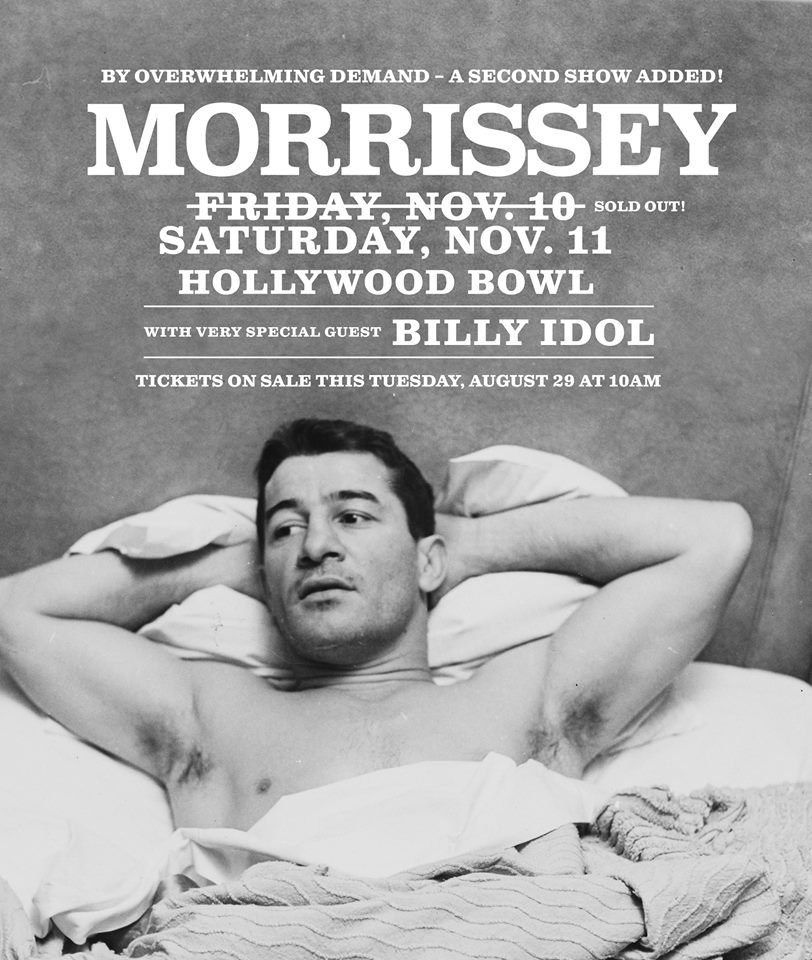 Anonymous said:
Yes but Depeche Mode are so relevant. A proper band with good pedigree. They just get on with it like the rest . None of this bullshit attention seeking nonsense that Steven throws around.
Well done Depeche Mode

to Dave and the lads.
Steven couldn't sell out 4 nights at the Bowel if he raised Bowie from the dead to support him.
I sincerely hope Steve manages to release one final masterpiece but ! A betting man would wager a hefty wedge of wonga that it will be a steaming load of soggy horse manure. Why would it not be a pile of shit ? The only freshly added ingredient to the mixture is that Frankenstein lookalike left handed bass performing lawnmower part.
Steven is a CrankFraud and he always will be ! FFS ! The term " CrankFraud " was invented exclusively for him ( the best label he's ever had in my opinion

)
The only fools now are the bots and debunking technology now points out that even their numbers are now in steady decline.

All Steve had to do if he really wanted chapter three to be successful was sack the Lawnmowers and pick up the phone. No I'm not talking about re-uniting The Jones's or whatever but a call to Alain would have been a very smart move

Until November spawns a crock of shite and we all enjoy a laugh at Stevens pathetic attempts to get media interest in the build up, sleep hard and dream of a number one smash hit because it's the closest thing to Steven ever achieving it.

Your obsession is that of a sick man.

I reckon if Bill is going to go out on stage wearing leather. He is a vegetarian, but wears leather which is a quite tossey inn nn it. Steve and Bill have been hangin' out a lot in LA lately, but there is no pics at The Sunset Marquis, riding jet skis together, roastin' marshmallows on the beach...etc because no one gives a shit.
U

AztecCamera said:
I reckon if Bill is going to go out on stage wearing leather. He is a vegetarian, but wears leather which is a quite tossey inn nn it. Steve and Bill have been hangin' out a lot in LA lately, but there is no pics at The Sunset Marquis, riding jet skis together, roastin' marshmallows on the beach...etc because no one gives a shit.
Click to expand...

I'd love a video of your rants and I bet you are shaking from rage a lot. I know from experience that whenever someone focus too much on a certain thing it is because of an event in the past.

You know women that hate redheads do so because a redheaded woman once stole their man so I reckon some english dude broke up your family and drove off with your mother and you haven't heard from her since.
A

Anonymous said:
Good Point. Just WTF happened to the cancer? Just a few months ago we were close to establishing a death watch, with Moz weeping in the hospital staircase, and the funny dude "Surface" making multiple diagnosisis about having to scrape his neck every few months...etc etc.

Check the neck for cancerous cells and then them off.
LOL What a load of
Suddenly, A MIRACLE

Cured by BMG, for the time being LOL
Click to expand...

Sorry ! I'm not having that, Surface knows what he's talking about.

Anonymous said:
Hopefully he'll get pelted with abuse and piss-pot projectiles for all drama he tried to create after Barone Raffaele questioned him for the driving offence in Rome. That incident on its own is enough to prove what a horrible little conniving c_nt Steven is.
Remember that stunt he pulled giving everyone the impression he had cancer.
4cking Pathetic in its entirety. Embarrassing behaviour even for a C-list performer.

Hecklers of the world unite and give him payback full pelt.

Just a minor point Benny but the name is Raffaele Barone.
Raffaele being his first name and Barone his last.
I don't think there will be much hostility towards Moz, maybe one lone wolf or so they say, when I look at the ticket prices.
"I love you Moz!" So when did you last see your psychiatrist, hmm?
"Yesterday. She said it was okay. She loves you too oo."

Anonymous said:
Sorry ! I'm not having that, Surface knows what he's talking about.

Best I found were terrace boxes
B

Well now a garden box
A

Second show is pretty much almost sold out
A

Anonymous said:
I logged on at 10am, all pool tickets were gone, they were still $900 a piece.
Click to expand...

not sold out, you just have to get the tix from stub hub etc.
H

You needed to use the album bundle code to see the pool tickets, but they went quickly. Got a set of Garden Seats, though.
A

How likely is a setlist switch up? Or will it be the same as the last few years?
B

I'm expecting pretty much the same set list between shows. Anyone thinking there might be a 3rd night added?
A

Anonymous said:
Second show is pretty much almost sold out
Click to expand...

Is it? Just been on TicketBastard and there are hundreds available.
Just bought 2 no problem

Looks like it's maybe 40-50% sold out - I took a screenshot of available seats:

Morrissey and Billy Idol. Doesn't it seem an unlikely pair?
You must log in or register to reply here.