An anonymous person posted the link:

A moment that changed me – a postcard from Morrissey
Penny Pepper - The Guardian
Living in chronic poverty, disabled and in a fiery gloom, I’d written to the Smiths’ lead singer. His reply stopped me from giving up on my dreams 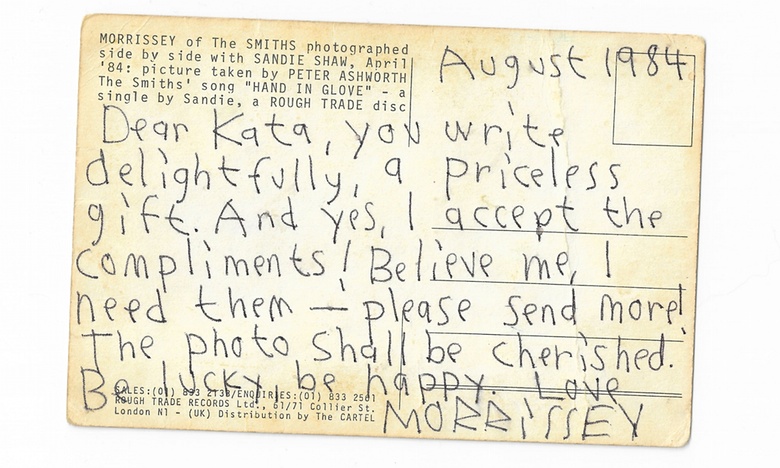 Thewlis said:
Indeed, well observed. They prefer to kick him him when he's on the ground.
Also, this story will be too painful for them, for reminding them of their wide-eyed former selves, when they, too, were touched by Morrissey and his music.
They are now so out of touch with their former selves they have to ignore anything that reminds them of that period.
Click to expand...

Anonymous said:
But this thread somehow turned into a negative one by posters yammering that Moz is no longer the person he was when he replied to fan letters in 1984 assuming, of course, that he would be an asshole today if he replied to someone's letter. They seem to get this "insight" from the fact how his statements are worded today BUT for all we know the statements could have been similar if there had been internet in the 80s. You can't make a comparison. Also, Moz was obviously capable of replying to fan letters in a sweet way while publicly offering support to the Animal Rights Militia and saying that the death of one butcher can't hardly be a loss. I doubt that anyone here agrees with these sentiments.
Click to expand...

Irish blood Irish heart said:
What, no peter, no bb, no benny all over this thread like a rash? Wonder why that is? Could it be because its a good news story about moz?
Click to expand...

BrummieBoy said:
....t's now completely superfluous to mock/ridicule Morrissey online. Nearly everyone I know in 'the real world' who used to speak up for his music/aesthetic now just facepalm/rolleye at his beclowned career.

................He was an interesting research project because of the the way he pre-dated The Curation Of The Narcissistic Self which has become ubiquitous through selfies, blogs, tweets, forum comments and all that crap. He did it before the technology allowed everyone to catch on and rumble him. Cherry picking Radical Art and plastering it on over the submerged person called 'Steven Patrick' he created the 'Morrissey' persona, surely one of the best Troll Fictions in Post-Modern culture.

I'm sure he never intended to end up a laughing stock, but that's what's happened. Fixated on Fame, he's failed to achieve it. And I bet all the money he has is scant comfort to him as he looks back on his decades of delusionality, now fully exposed. He was very clever, very cunning, 'devious, truculent and unreliable' indeed. And for the final time: it's nothing personal. I hate nearly every figure in popular music for similar reasons but he took it the furthest, thus it was inevitable that his bubble of falsehoods would explode the loudest when he lost control......

............In the end it was sheer naked Careerism that did him in, just as it was sheer naked Careerism that got him going in the first place. A cautionary tale of malignant narcissism and the curated self. Viva Hate turned out to be a portent for his solo career implosion. So let him be, consumed in bile and anger, raving against his failing C List fame, imagining vast conspiracies...utterly beclowned by #ProfitFromParis & #TSAisthenewISIS
Click to expand...

Verb. To make a complete idiot of oneself in public. To behave or speak in such a way, or to make a comment or express an opinion that is so profoundly witless, senseless and obtuse, that you have forever after defined yourself as a person of comical value only. Never to be taken seriously again. Of worth only as an object of ridicule and derision.


....When he has to finally Get Off Of The Stage and face 'Steven Patrick' again in the mirror.....I hope he survives the encounter with that buried person. You can fool some of the people some of the time but you can't fool all of the people all of the time. And you can never fool the person you were into accepting excuses for why you became the monster you now are, because you had a choice to become someone authentic but chose Artifice above Art and craved Money, Wealth and the Power of Personal Fame. So, here's the voice of the stangled, submerged 'Steven Patrick' as he sees the monster that is 'Morrissey' take shape in the mirror....the swan song of someone who knows he's slowly being suffocated by his shadow.....no wonder he's fought suicide ever since. And to think that friends of mine thought it was a 'love song'....perhaps Morrissey too thought it was....

with every good wish and wishing you all farewell

"Well I wonder
do you hear me when you sleep?
I hoarsely cry

Well I wonder
do you see me when we pass?
I half-die

Please keep me in mind"

A deal with the devil or pact with the devil is a cultural motif, best exemplified by the legend of Faust and the figure of Mephistopheles, but elemental to many Christian folktales. According to traditional Christian belief in witchcraft, the pact is between a person and Satan or a lesser demon. The person offers his or her soul in exchange for diabolical favours. Those favours vary by the tale, but tend to include youth, knowledge, wealth, fame, or power.

Last edited by a moderator: May 15, 2016
Enjoying Morrissey's fall from grace into ignoble ignominy!

Anonymous said:
Awkward! Full grovelling apology is on the way from Poet. Not. Shame is the Name. Posting a picture of the poor defenceless lady- Poet pointing at her "Ugh look at her. Yucky!"

Who's the coward now you dim-witted dullard? Don't go into law whatever you do.
Click to expand...

Stop projecting YOUR thoughts upon others. I miss shopping at Dillard's.

DavidK said:
I am assuming this is Poet, but I hope you are not inferring that I think Penny is a monster (nor does Morrissey think that about the girl in his song, I am sure). I do not. I am just wondering if her story had any influence in Morrissey writing that particular song about such a specific subject. Posting that picture on the other hand, was only meant to shame her.

Although - I do agree somewhat with Poet that it was a little off the cuff to add that grumpy old man comment in her interview. Poor choice of words.
Click to expand...


Anonymous said:
No i am not poet. Never ever.
Click to expand...

Upstarts and Oligarchs blog review by Rob Butterfield: "Moz is back ...and he’s certainly no dog on a chain" 10/10
2