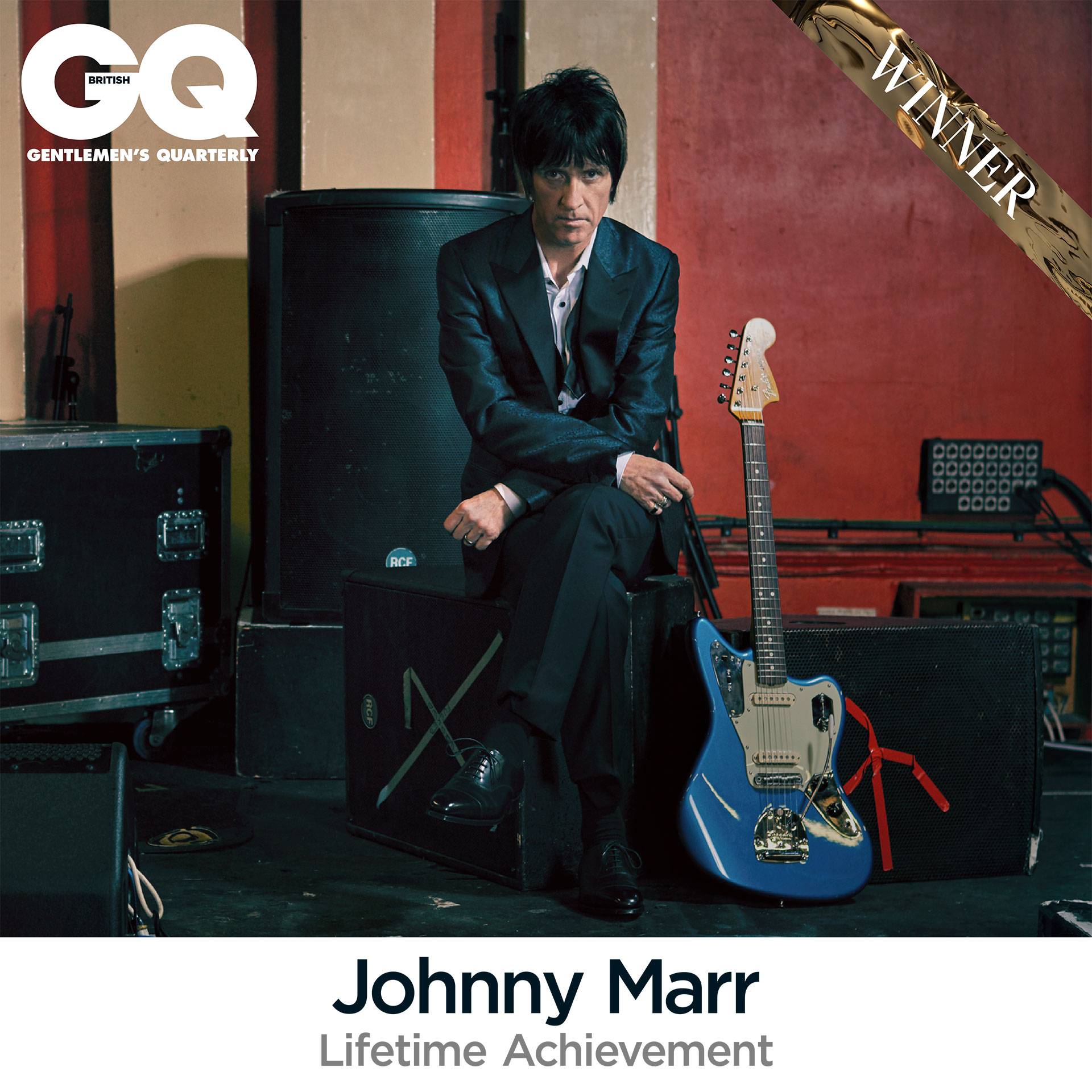 "As one of the founding members of The Smiths, Johnny Marr was responsible for reinventing guitar music for a new generation. And since then, it’s perhaps easier to list the artists he hasn’t collaborated with rather than the ones he has – no joke, there’s an entire Wikipedia page devoted to it, from Bryan Ferry to Paul McCartney, Talking Heads to The Pet Shop Boys." 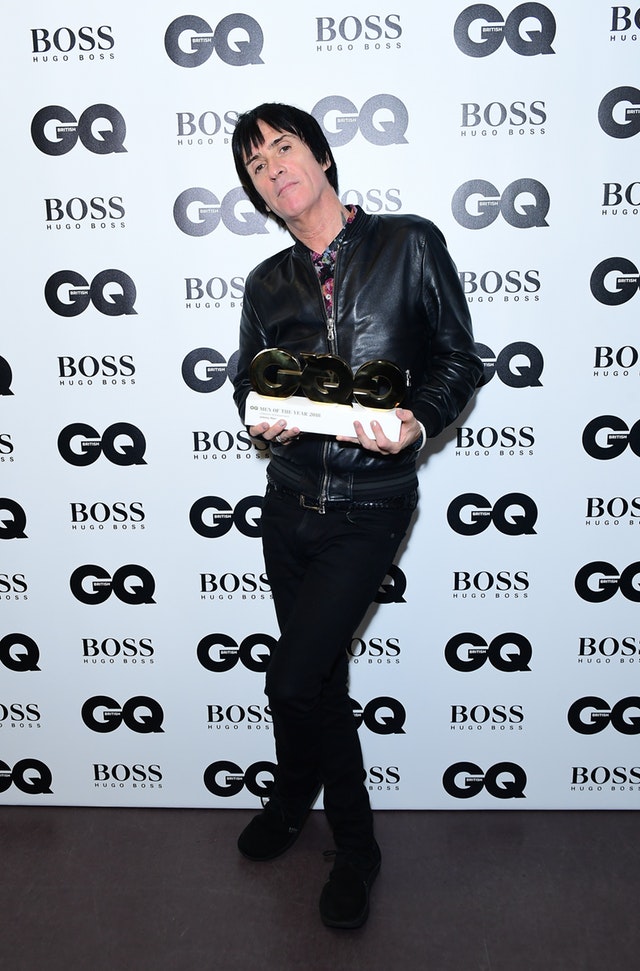 Johnny Marr vows to never retire as he picks up GQ Award.

"The former Smiths guitarist said it would be a waste of his famous haircut if he were to call it a day in the music industry."

He did thank the other Smiths. To be fair, I think if he mentioned Morrissey by name in this crowd, it might have gotten some boos.

Anonymous said:
I'd heard Marr was only a little fella, yet he towers over Minogue...
Click to expand...

Platform shoes or a foot stool.

Anonymous said:
You didn't even try! Did you? Now why is that?
Click to expand...

Because why should I? Morrissey didn't.

Johnny Barleycorn said:
Before Johnny gets too excited GQ also announced David Lammy as politician of the year and he thinks Henry VII succeeded Henry VIII.

I'd always suspected he was a bit thick but this is on another level.
A

g23 said:
Because why should I? Morrissey didn't.
Click to expand...

If World Peace is None of Your Business and Low in High School are so bad, it shouldn't be that difficult, right?

Anonymous said:
Nice to see for his smiths work alone but some of these collaborations are very iffy or even just misleading. The Paul McCartney collaboration didn’t lead to anything or produce any material. It was a session where the beatle gave him some advice. He toured with the pretenders and played on one single before getting into and argument with hynde and leaving
Click to expand...

I don't think there's room in an article for all he's done. It really boggles the mind how much amazing music this man has made in his solo career and his bands the Smiths, Electronic, the The, Modest Mouse and the Cribs.

Here's the Wikipedia page on his collaborations: https://en.wikipedia.org/wiki/Johnny_Marr_guest_musician_recordings

Zoinks said:
I don't think there's room in an article for all he's done. It really boggles the mind how much amazing music this man has made in his solo career and his bands the Smiths, Electronic, the The, Modest Mouse and the Cribs.

Here's the Wikipedia page on his collaborations: https://en.wikipedia.org/wiki/Johnny_Marr_guest_musician_recordings
Click to expand...

Yeah but has he ever covered such deep lyrical ground as Morrissey does on "Spent the Day in Bed" or "Kick the Bride Down the Aisle"?
"If no one out there understands, start your own revolution and cut out the middleman."
N

Every musician dreams of being honored by GQ.

next year they will give this award to josie cotton
V

Id give DramaJ some grief about the leather jacket, like the haters give Moz, but then realized its rented, for the event. Same as that shiny wool suit. GQ paid for it since down on his luck DramaJ has been low on funds since the disastrous CALL THE COMET

CD release. Nobody bought because they heard the clips and thought it was chinese music
A

Harsh Truth said:
Yeah but has he ever covered such deep lyrical ground as Morrissey does on "Spent the Day in Bed" or "Kick the Bride Down the Aisle"?
Click to expand...

Maybe on boomslang. I’m aware of his collaborations and I’m a fan of his but it, the paragraph, felt like the it was reaching. Mentioning McCartney says t me maybe the person who wrote it doesn’t know his collaborative work very well

He addresses musicians getting awards in the article:

Reflecting on his award, he said: "It's great to get recognition for your work, I first went to an awards ceremony in about '83 or '84, something like that, and I was really young then and Ray Davies was getting an award.

"I was standing in the audience and I was feeling an appreciation for, in this case, Ray Davies, so I take it in that kind of spirit.

"It's quite easy in some ways for rock musicians to be dismissive of this sort of stuff because it isn't why we do it but I take it in the spirit of it, a big pat on the back. Because it's nice to be a room where people say, 'We like you'."

Anonymous said:
@ GQ You forgot to give Morrissey his Lifetime Achievement Award [edited]. Unless you think Marr composed and wrote the lyrics to every Smiths track all by himself?

Now for the hard part: Johnny Marr has recorded nothing of note since The Smiths split. Morrissey however, is still at the top of his game. There is no lyricist alive today that you could compare him to. Don't believe me? Go and listen to World Peace is None of Your Business, and Low in High School.
Click to expand...

Err not the best though are they

SOUTHPAW GEEZA said:
Where is Morrisseys? (Correct me if he has one) Or even Alain Whyte?

Johhny played and composed guitar very well, but I think we all know who contributed the most to The Smiths. Maybe Johhny should get a backstabber award?
Click to expand...

ACTON said:
Whenever Johnny is in the News it's for something positive. Whenever Moz is in the news it is for something negative. Most of which Moz brings on himself. Fair dues to Johnny.
Click to expand...

Wanting a comet to blow up the Earth is positive news? WtF are you talking about?

That broody photo of Marr sitting beside the guitar makes me think he wouldn't look out of place skulking in a cobwebbed corner of a secluded studio recording Disintegration 2 with Robert Smith. Let's get a petition started to get Johnny invited to The Cure recording sessions currently happening.

Poor Morrissey...He should be the one (maybe together with Johnny).
You must log in or register to reply here.

Yesterday at 4:30 AM
Catholic