Liam Gallagher talks about growing up and forming Oasis

Liam Gallagher: 'My mam hit me round the back of the head with a brush for skipping school' 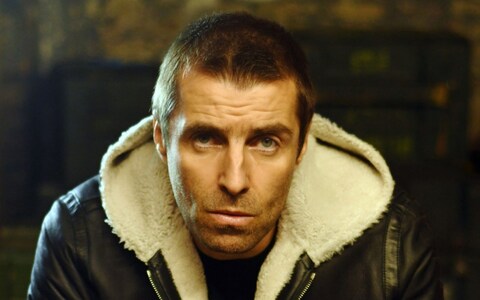 
We asked the singer and songwriter, 45, what his younger self would make of him today...

I was the baby of the family - Noel's five years older than me, Paul's seven - but my mam treated us all the same. Burnage was a great place to grow up. It's not as moody as people make out. It's in between Didsbury, which is a nice area, and Heaton Moor, which is posh as p---. In Manchester, everyone aspires to be there.

If I was always out playing football, load of energy, never depressed, not a loner, just rounding up the troops let's go and have a bit of mischief. Always chasing the girls - but once you got 'em, I was like, "I'd rather go out with the lads".

I was about seven when my mam left my dad. He was out all the time, fighting, beating my mam up, beating Noel and Paul up. Never touched me, though. Then, one night, while he was out, my mam got her brothers round, got all our gear in a truck, left him a mattress, and we went off to our new house.

I discovered I could sing by singing along to the Top 40 on the radioLiam Gallagher
It was immediately better for all of us, although I missed my mates: we'd only moved up the road but I couldn't go back round that area because he was always around. If I was wagging school I'd see him. I'd be stood there, having a cigarette with my mates, he'd spot us, start chasing us, shouting, "where have you gone, you b-------?" - because he didn't know where we'd moved to. I'd always out-run him. 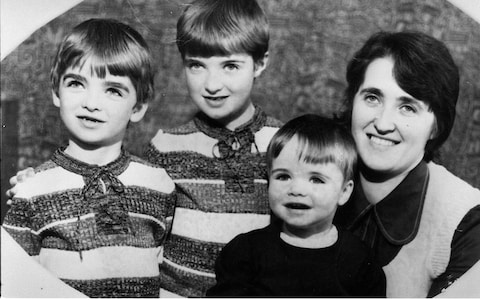 Noel, Paul, Liam and mum Peggy CREDIT: NEWS TEAM INTERNATIONAL
My mam was a dinner lady at our school. I'd go in, sign the register, then jump over the fence and go to my mate's house. Then I'd come back into school, sign back in, just in time for lunch with my mam. She'd ask: "How was double maths?" "Yeah, it was all right, struggled a bit" Eventually the head teacher found out and spoke to her, and she gave me a brush round the back of the head.

I left with no qualifications, and the school got me a job in a garden centre, creosoting fences, a Youth Training Scheme thing. I was getting 50 quid a week. I'd finish at 3pm, midday on a Friday, so I'd walk past the school, waving my 50 quid at my mates.

I discovered I could sing by singing along to the Top 40 on the radio. Then when I saw The Stone Roses live, I thought: "I could do that. I've got the look, I've got all the clothes, the haircut's intact, all I've got to do is stand in the front of the microphone and open my mouth - easy." Three mates that I knew through playing football had a band called The Rain. I was thinking: "If I can get in there with them, and do my singing, I know for a fact that I can get our kid in." Noel and Liam from 2008 CREDIT: ZAK HUSSEIN
Noel was travelling the world as a roadie and writing music with different weirdos in town. But I knew that once he came back off tour, I could say to him: "You know them songs you've got? Well put them through this vessel" I knew he'd come with me. So basically Oasis stems from me. I was obsessed with being in a band, obsessed with singing. And I still feel like that. As long as I can get up and wallop it out, I'm quite happy. I've got no big ideas to be the greatest songwriter in the world; I'm never gonna be that.

My 16-year-old self imagined being in a band exactly as it is for me now. Music has never ever failed me once. It's everything I imagined it to be. Even when it was particularly bad with me and Noel at the end of Oasis, it was still better than digging holes.

Great read. Thanks a lot!
"[I call] for every shade and persuasion … we shall always be alongside each other - everyone's culture of value."
- Morrissey, May 2019

Very nice, but the title is terrible. Maybe he owes his big self esteem to the fact his mother didn't stay with his father tolerating abuse. Mothers are underrated.

Liam's been nominated for a Brit award in the best British male solo artist category - well done to him as those album sales were astonishing.

I follow him on Twitter and he is one of the few artists who manages his own account and interacts with his fans all the time.
You must log in or register to reply here.