Low In High School is out now. 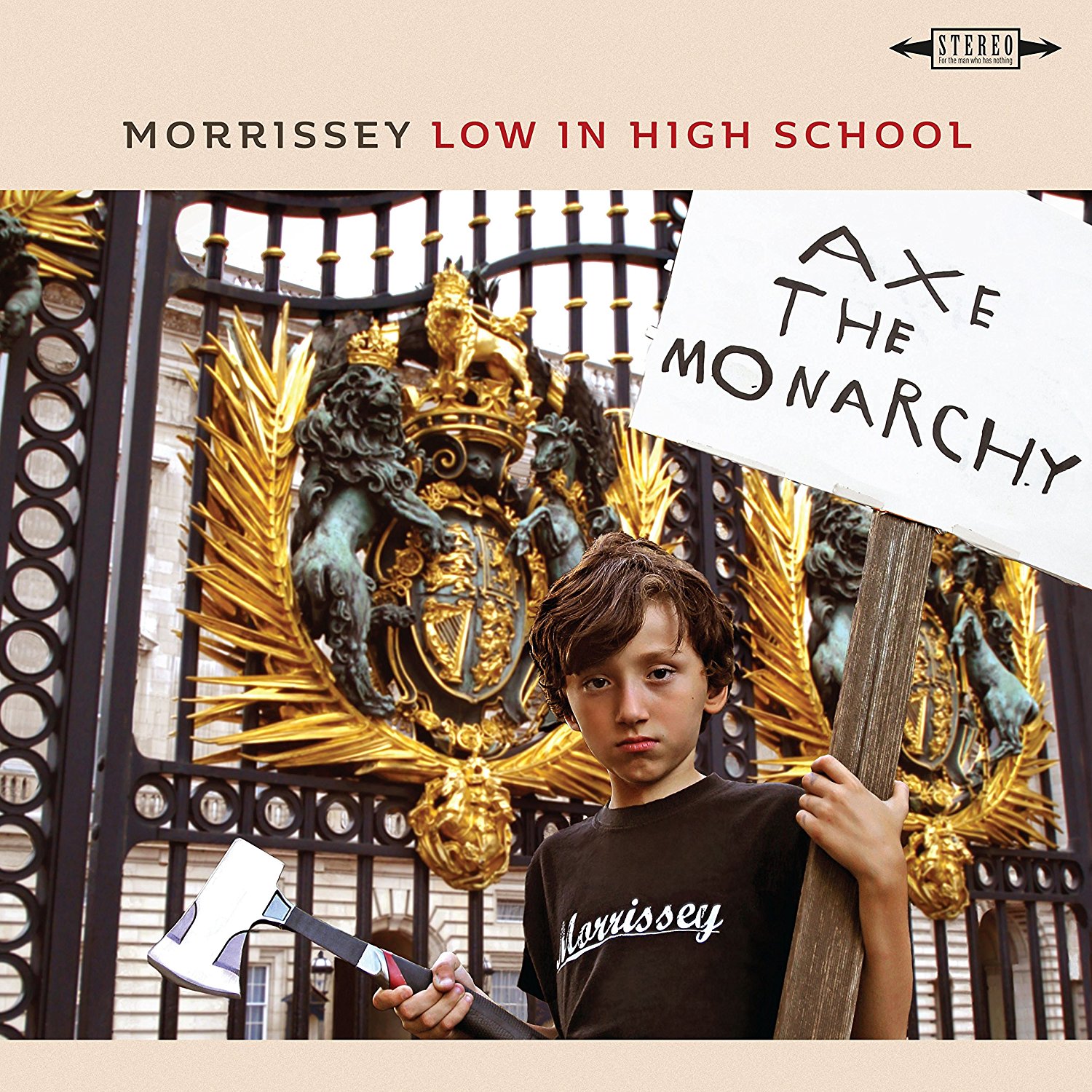 Anonymous said:
How can i sit here and accept these new songs when i know "action is my middle name" is still just sitting out there just begging to be recorded and released as a single.
Click to expand...

In light of recent biz, the lyrics kind of... Yeah.

"Biting my initials into your neck
You are my possession, you don't realise yet
Am I moving too fast for you?
Am I beginning to confuse you?

Action is my middle name
I can't waste time any more"

Member of the Month™

It's been a while. Been playing this a lot lately. Here's my track by track:

1) "My Love, I'd Do Anything For You" - MONSTER of an opener. Has that "Your Arsenal" glam rock swagger. LOVE it. Hoping he does it live next week.

2) "I Wish You Lonely" - Probably my favorite of the 3 singles released in advance of the album. It's catchy. Some cool lyrics.

3) "Jacky's Only Happy When She's Up On The Stage" - Like the above song, it's catchy and rockin'. I'm just glad that the reports of the lyrics being "BREXIT, EXIT" at the end were rubbish LOL

4) "Home Is A Question Mark" - Instant classic Morrissey track. This is the kind of song he's so great at writing. This could've been on "You Are the Quarry" IMO. Fits in with that feel. Much like "My Love..." I'm hoping he does this one live next week.

5) "Spent The Day In Bed" - Was completely underwhelmed with this when it was released in September. I've grown to quite enjoy it over time. Like the other two singles thus far, it's extremely catchy. Some of the lyrics are "EH" to me (the whole "Fake News" type vibe) but when he sings that "Time, do as I wish" refrain it's just classic Moz to me.

6) "I Bury The Living' - This is the "I'm Not A Man" of LIHS. Longest track, lots going on. That said, the ending kinda comes out of no where. I like it more each time I listen.

8) "The Girl From Tel Aviv Who Wouldn't Kneel" - Is it just me or does this have a total "Kill Uncle" vibe to it? I could definitely see this being a track from that album. It's something different for Moz - I like it.

9) "All The Young People Must Fall In Love" - I'm guessing this is an anti-Trump tune? "Presidents come, presidents go...". HA. Good song though, very sing-a-long-y.

10) "When You Open Your Legs" - This album really has that "Ringleaders" feel with all these naughty type lyrics huh? Classic Moz type tune though. I'm sold on it.

11) "Who Will Protect Us From The Police?" -I think this is "Ganglord Part 2". I'm actually really into the electronic sound of it. I enjoy this song - a lot of people seem to be not into it. Oh well.

All in all, I gotta say this is more solid than WPINOYB (there's two songs from that album I'd remove off in favor of B-Sides - whereas so far there's no skippable tracks on this one for me)

That said - I'm really discouraged by the things he's been saying lately - and getting to the point where I can't defend. But if I'm letting the music speak for itself - this album is an 8/10.
Click to expand...

BrummieBoy said:
Just think how many poor delusional people I've rescued from The Cult Of Morrissey!
Click to expand...

Not even himself.
He is the high priest of the cult.
Considering his thousands of posts during so many years.
In fact, I believe he “recruited” many disciples for the Moz cult.
Intended? Or not?
"I love you Moz!" So when did you last see your psychiatrist, hmm?
"Yesterday. She said it was okay. She loves you too oo."
P

Ketamine Sun said:
So I see you just rated ten of my posts negatively in a row.


Do you really want to play this game ?

Play? Play what? What are you planning you mad impetuous handsome fool?
P

Johnny Barleycorn said:
But that’s the point. It has its highs and lows. It’s far better than WP, but the point of opinion is that it quantifies the good, the bad and the ugly. You do it when you might consider Panic a superior work to I Keep Mine Hidden, or Suedehead better than Smiler With Knife, or even Van Gogh a more important cultural icon than Van Morrisson.

If you are suggesting one cannot call out I Bury The Living for being simplistic, nasty tripe then I’m afraid we will have to disagree.

Every normal person wishes to live in a peaceful world. Pete Seeger and John Lennon and others were articulating that decades ago. It’s nothibg new. If you are going to do it today you’d better have something important to say. “Soldiers are bad” isn’t. In fact it is barely an opinion, let alone worthy of being a centrepiece of an album.

Last week I watched a documentary about the retaking of Mosul from ISIS. The men on the ground, not those pressing buttons a thousand miles away while scoffing a sarnie, were heroes. They fought and died inch by inch to clear that city room by room knowing that against ISIS capture was worse even than death. They were doing today what the Allies did in Europe seventy years ago. Cleansing the world from a literal evil.

For them to be summarily dismissed by a multi-millionaire vaudevillian as somehow the same as those they were fighting isn’t just ill-judged. It’s disgusting.

Nobody asked Morrissey to release this album and share his strong opinions, but to expect him to do so but not receive strong opinions in return is ludicrous.
Click to expand...

Another excellent post Jonathan!
Similar thoughts occurred to me on hearing I Bury The Living.
A condemnation of the soldiers who not only risk everything, when they return home injured or maimed they have to rely on f***ing charity.
(Pardon the potty mouth.)
Well done Moz.
P

Mauresque said:
Very interesting album, and much better than I expected (after reading in this thread.)

1. You Are the Quarry
2. Vauxhall and I
3. Low in High School
4. Viva Hate
5. Kill Uncle
6. Your Arsenal
7. World Peace is None of Your Business
8. Ringleader of the Tormentors
9. Years of Refusal
10. Southpaw Grammar
11. Maladjusted
Click to expand...

But Maladjusted has some wonderful songs!
Surely its much better than the latest platter?
P

Eric Hartman said:
I still find Low in High School to be a truly horrible album. I don’t like the sound of it and the lyrics are ghastly. His worst ever.

Marie Antoinette’s “Let them eat cake” is a sensitive statement full of care and empathy compared to the bile Morrissey has put to music on Low in High School.

Please Morrissey, tell me more about the horrible dinners with bogus music moguls. Your millionaire popstar lifestyle sounds truly dreadful. Oh look over there Your Mozjesty, a war cemetary for you to piss on!

Morrissey has shown his true colors. There is no going back anymore. This is who he is and future albums will only get worse.

The sense of entitlement he radiates puts him right up there with Donald Trump, Kim Jung Un and the Queen. He may not like them, but he is exactly the same.
Click to expand...

Anaesthesine said:
You are so very wrong. Great music knows no age. At the end of his life Bowie gave us Blackstar, which was visionary and mesmerizing.

Morrissey has occasionally cited Buffy Sainte-Marie as someone he admires. The woman is 76 years old, and this is her latest release. This song is ferocious, defiant, powerful, political and urgent. It's just beautiful:

I bloody liked that!
P

bhops said:
Goodness gracious me, Home Is A Question Mark is one of the great Morrissey ballads. That note at the end is spine tingling.
Click to expand...

Yeah, that is a great song.

After hearing his recent comments, I almost was hoping to not like the album. However, I like it quite a bit! I wish I could be like many of you on this forum that can separate what this man has become and his music. I am struggling.

I really like Home, Israel, I wish, and All the young people.

That said, Is it just me or does he tend to repeat lines in all his songs? It seems like lazy writing to me.
Throw your homework onto the fire.

Peterb said:
Play? Play what? What are you planning you mad impetuous handsome fool?
Click to expand...

the rating game. tit for tat and all that.
"...to say the things he truly feels
And not the words of one who kneels..."
P

Ketamine Sun said:
the rating game. tit for tat and all that.
Click to expand...

I see. But K. rather than nurture an enemy why not build a bridge?
Eric H. is clearly an excellent chap.
You just disagree on the new album.
It's much more satisfying making chums than having slanging matches.

Peterb said:
I see. But K. rather than nurture an enemy why not build a bridge?
Eric H. is clearly an excellent chap.
You just disagree on the new album.
It's much more satisfying making chums than having slanging matches.
Click to expand...

Well, i disagreed with his post, so I gave him one dislike. Then your 'excellent chap' gave me 12 ! talk about building bridges.

No1uno said:
Welcome back Fred, hope you and the fam are doing well. Good assessment.
Click to expand...

Thank you! I hope you're well, too.

Morrissey acts like a condescending know-it-all. His lack of education and insight makes him sound childish and out of touch with reality.

Low in High School is nothing more than political rants put to mediocre music.

So music isn’t allowed to be political?

Low in High School review in The Music magazine (Australia)