Entered to Coronation Street theme and opened with What Difference Does It Make?

What Difference Does It Make?
Bigmouth Strikes Again
Still Ill
Reel Around The Fountain
Cemetry Gates
Ask
Hand In Glove
Some Girls Are Bigger Than Others
The Boy With The Thorn In His Side
Girlfriend In A Coma
Well I Wonder
Heaven Knows I'm Miserable Now
Panic
William, It Was Really Nothing
Barbarism Begins at Home
Please, Please, Please Let Me Get What I Want

Encore:
How Soon Is Now?
This Charming Man
There Is A Light That Never Goes Out 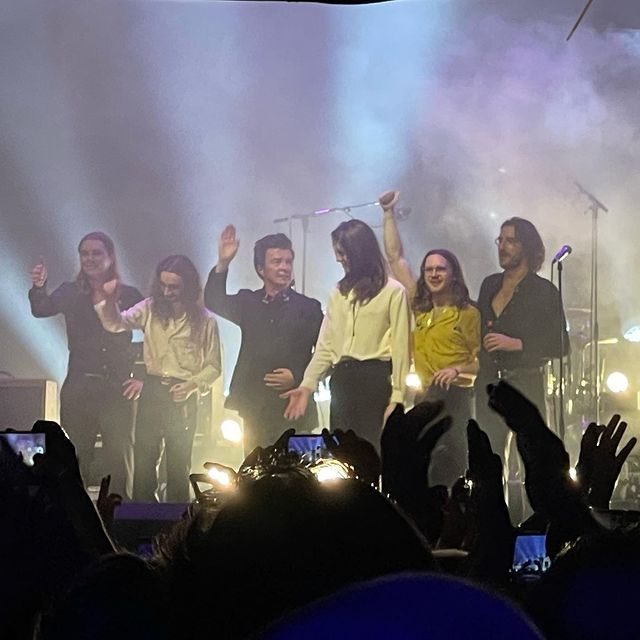 Having fun is cute, but let´s be honest the recitals were done for the love of money, not for love The Smiths
Moz and Johnny are annoying for sure,.The attitude of these people was disloyal.
J Marr told them and Moz told him when he went to see another show.
That´s why criticize R a and company, i´m sorry but i have certain values that i strictly respect, and i don´t like it when people are advantageous.
And finally i want to say that MORRISSEY there is only one and there will be none like it.
Anyone can sing to Moz ,in fact he posts when he likes what the fans do.But those two recitals were not for love...
Luckely Moz has people who really love him ,like me who without knowing him personally i love him and much and even insolitamente.

Luji Lujissey said:
Hehee ha ha jajiii oh GLORIOUS Jesus Ricky disguised as Morrissey!!!! And the potato in the mouth, sometimes it gets stuck in the throat and the voice so deep with the potato there. his voice does not come out uhhh a total disaster!!!!!!
Click to expand...

Luji Lujissey said:
Uh Ricky has more surgeries on his face!! Stop with the aesthetic surgeries, or your eyes will end up on the back of the neck of so much stretching,!!!!!
Click to expand...

What an AMAZING setlist!!!

Yeah it's not as if people needed a bit of that at the moment.

It's a good thing that Morrissey didn't go after all. He'd have had to creep behind every person having a good time to yell: "HOW DARE YOU ENJOY YOURSELF WITH MY SONGS?!?"; that would have been an exhausting evening for everybody. Better for him to let Echobelly bore his slippers off.

I did note Johnny was a bit grumpy about the venture, due to a "back story", that prevented him from seeing this was the epitome of cool. Well. Maybe they're both too old to get it.

perhaps now is not a good time to tell M that when he sang about rain-coated lovers, the only cultural reference some people had for that was Rick in the never gonna video.

It's an 80's thing; you wouldn't understand.

A is for life, not just for the 'ternet.​

Wow, the musicianship on this is brilliant.

I'm in bed in Borehamwood Travelodge attempting to recover from last night's London Town leg of this epochal event at The Forum, Kentish Town.

Missed the Albert Hall as I'd already committed to Stealing Sheep

and Richard Hawley gigs in Wrexham previous nights...both of them were fcUKin ace, too...

Absolutely MAD audience, never seen anything like it since...zenith-era Smiths gigs...got roped in to the Chelski FC 'Smiths Contingent' on manoeuvres innit..#ohwhatanight!!!

BB
in 'that Londinium'.. ..well...outskirts...
...near the Big Brother studios...
Enjoying Morrissey's fall from grace into ignoble ignominy!

Surface said:
Wow, the musicianship on this is brilliant.

That was frickin' brilliant

On a related note - can the original preformers/recorders of a song stop anyone else performing it in a paid show (should they wish to)? Do Morrissey and Marr get anything monetarily by having their songs performed by someone else in a live paid show?
Click to expand...

No, they can't stop performance by others unless it's defamatory or derogatory and that would require legal test.

I believe mechanical royalties would be due but I'm not entirely sure how it works £ wise.
Enjoying Morrissey's fall from grace into ignoble ignominy!

Rick Astley and Blossoms, Albert Hall Manchester, review: a love letter to The Smiths from an unlikely fan

It’s Friday night in Manchester and inside a sweaty, sold-out Albert Hall I am excitedly waiting to see Rick Astley and Blossoms sing songs from The Smiths, is a sentence I never imagined I would write.

The gig had come under fire from Johnny Marr who had dubbed it "horrific and funny at the same time", while an article posted on Morrissey’s official website called it a "futile attempt" to separate Morrissey from the music he wrote. They needn’t have worried: tonight was deeply weird but ultimately wonderful - a musical love letter to The Smiths penned by true, if unlikely fans.

Stockport quintet Blossoms were not born when The Smiths were releasing music and Rick Astley was making music that existed in a different musical universe. And yet here he was tonight, in spectacles, a dark, double-breasted blazer and wide-leg, dogtooth trousers, swinging the microphone to huge cheers as he launched into What Difference Does It Make?

Astley initially appeared a diffident presence - trying to suppress his innate Rick but nervous about going full-tilt Moz. The songs saved him and us - the 19-strong set list was studded with beloved classics and there was an uncomplicated joy in hearing them performed with love and affection.

This was a night filled with memorable moments: the communal singalong of 1986 single Ask, when Astley crooned "to a buck-toothed girl" and the crowd hollered back "in Luxembourg"; Blossoms frontman Tom Ogden playing a harmonica on Hand in Glove; Astley miming a running action when singing "provincial towns you jog round" during Panic; and guitarist Josh Dewhurst’s shimmering, menacing work on How Soon is Now? which culminated in Astley and the audience singing "I am human and I need to be loved."

It felt genuinely transcendent and a show that threatened to resemble a celebrity version of Stars in Your Eyes became revelatory and transporting. I closed my eyes and could almost believe I had travelled back in time 35 years to October 1986 and the last time The Smiths played Manchester.

The night ended with a joyous This Charming Man and a glorious rousing There is a Light That Never Goes Out. The question that hovered over Astley’s head during the night was whether it was possible to celebrate the songs by The Smiths without celebrating the controversial and problematic man who wrote them.

What was revealed was that, while Morrissey and Marr created the songs, they now belong to anyone who loves them and tonight they belonged to all of us in the Albert Hall, to a young band from Stockport and, as beautifully improbable as it seems, to Rick Astley.
Click to expand...

^This
Enjoying Morrissey's fall from grace into ignoble ignominy!

Ketamine Sun said:
Morrissey is not just covering his songs.
Click to expand...

Morrissey has been a karaoke

tribute artist to his previous iteration as 'vocalist of The Smiths Family' since 1988...karma is a bitch, Steven...she kept the receipts and gave them to Ricknon behalf of Bowie...
Enjoying Morrissey's fall from grace into ignoble ignominy!

Ketamine Sun said:
Yeah, and it’s awesome the way he makes them his own.


Yes but how many years did M wait before pandering to fans or doing what’s expected of a solo artist for ‘success’ ?

Paging Liam...we gave a numpty here for you to 'process'...
Enjoying Morrissey's fall from grace into ignoble ignominy!

Surface said:
Very well put Gregor, I love this solo track of his, Once, completely different than the Oasis stuff.

I saw Liam do a 'surprise' gig in Digbeth at the Peaky Blinders Legit festival in September 2019. He was absolutely awesome, as were Primal Scream & Frank Carter's mob. I sensed then he could be Bigger Than Oasis...and with Knebworth x2...he almost is! Getting a crew to collaborate on songwriting has uplifted him. Morrissey could try it...ask Richard Hawley to finite a few spare anthems, etc..
Enjoying Morrissey's fall from grace into ignoble ignominy!

Barking said:
Yeah it's not as if people needed a bit of that at the moment.

It's a good thing that Morrissey didn't go after all. He'd have had to creep behind every person having a good time to yell: "HOW DARE YOU ENJOY YOURSELF WITH MY SONGS?!?"; that would have been an exhausting evening for everybody. Better for him to let Echobelly bore his slippers off.

I did note Johnny was a bit grumpy about the venture, due to a "back story", that prevented him from seeing this was the epitome of cool. Well. Maybe they're both too old to get it.

They're not Morrissey-Marr songs and never were as they were always, always composed by the entire Smiths Family including so-called 'lawnmower parts', ie: the engine room rhythm section. That Morrissey now dares to try and quote appropriate James Brown is beyond risible as is John Maher's refusal to come out of the closet and brown down publicly before his hidden idol, muse and inspiration: Steve Hackett. Anyone who's ever wielded a barely competent guitar 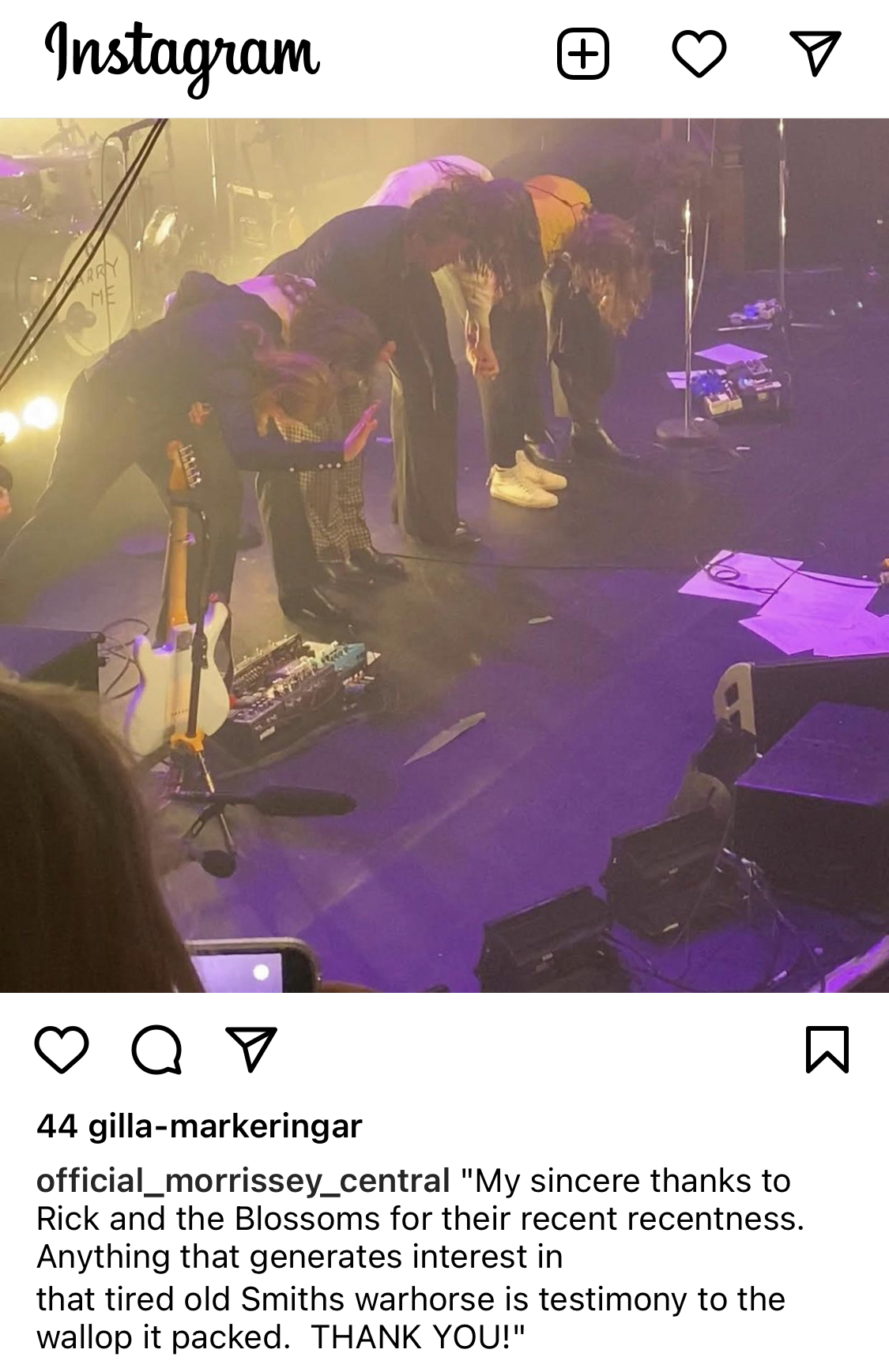 This will make some people SHIT THEIR PANTS.
"[I call] for every shade and persuasion … we shall always be alongside each other - everyone's culture of value."
- Morrissey, May 2019

This is the element of all of this I find most warming. That the glorious songs of The Smiths are loved all over again, sans taint

The Times: "Rick Astley on his latest unlikely sell-out venture — covering the Smiths with Blossoms" (September 30, 2021)
2 3 4