In 2009 all the Smiths albums were remastered and reissued on vinyl and mp3. I can find the vinyl on Amazon - but where can I get the 300 kbps mp3s?
E

Much debate on if these are really "official"

jessesamuel said:
In 2009 all the Smiths albums were remastered and reissued on vinyl and mp3. I can find the vinyl on Amazon - but where can I get the 300 kbps mp3s?
Click to expand...

Are you talking about the 180 gram Rhino reissues of the 4 albums? (s/t, Meat Is Murder, The Queen Is Dead, Strangeways)
"Remastering supervised by Johnny Marr"
As far as I know, MP3s were never offered. At Least there were no download codes with the LPs. 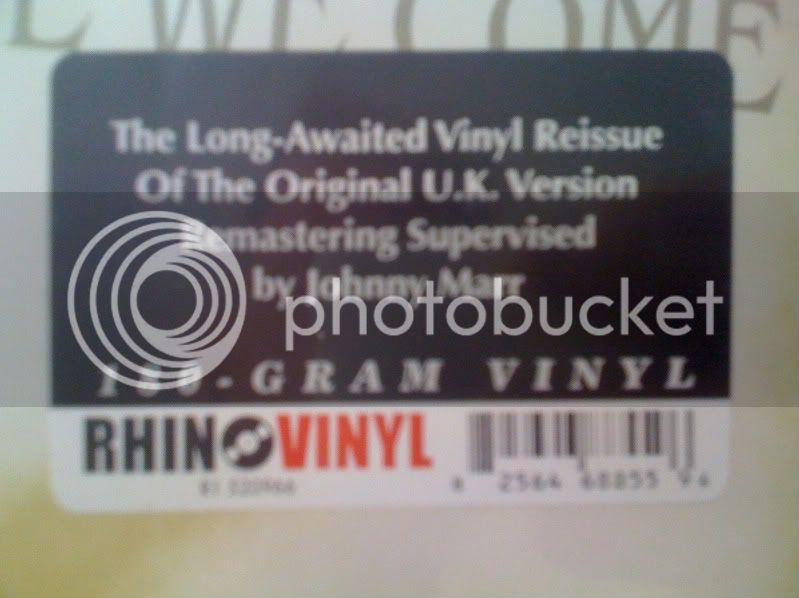 Yeah, I was talking about those Rhino remasters. There was a story that there were mp3s included.

On the current poll someone said:

the smiths albums have already BEEN remastered (Score:0)
seriously? OK, the smiths remasters have not been released on CD, but they were all remastered by johnny marr and released on vinyl (and accompanying 320 kbps download) in 2009.

all four albums, alongside 'the sound of the smiths' compilation and 7" and CD singles box sets.

and no, i don't care if you don't have a turntable. all the vinyl formats included high-quality downloads of every track. would CD's be nice? sure. but if people are really so desperate for remasters, they're already out there.

oh, and like someone else said, it seems like most people have no idea what remastering actually is...especially the guy who wants "kill uncle" remixed with additional guitars.

Vouchers for 320kbps MP3s of the remastered album tracks were sent with each 180 gram vinyl LP, you can download these from the Rhino website and are, as far as I'm aware, one of the only ways of listening to the Johnny Marr 2009 Smiths remasters (apart from The Sound Of The Smiths and the CD Singles boxset of course). I think it is a case of one-download-per-person/purchase from the Rhino website, so there's no possibility of sharing this data. However, there are shadier ways of finding them (and trust me it is worth it - the remastered tracks sound excellent, especially on the first two albums) - someone already mentioned deeeeeemonoid so I'd suggest you try there first.
P

I'm talking about the UK reissues by the way, not sure about the US ones. The UK vinyls all came with download codes/vouches within the vinyl packaging.

Oh, thank you. That clears up the last of my questions about the remasters!

But I can't download the torrents at Demonoide - I need an invitation code because registration is closed. Can anyone help?
Last edited: Oct 18, 2010

If you are able to get .mp3's of the remasters, heres hoping that you will post them

I don't have an invitation code to give, but I have put the remastered albums here:

The Truth Is Out There

pronocturn said:
as far as I'm aware, one of the only ways of listening to the Johnny Marr 2009 Smiths remasters (apart from The Sound Of The Smiths and the CD Singles boxset of course).
Click to expand...

As far as I know, neither Johnny Marr nor Stephen Street were involved in The Sound Of The Smiths or the Singles Box Set.

Oso Blanco said:
As far as I know, neither Johnny Marr nor Stephen Street were involved in The Sound Of The Smiths or the Singles Box Set.
Click to expand...

Marr got involved in the remastering of Sound of the Smiths. Interview here.
http://www.smithstorrents.co.uk/
P

A quick trip to the Rhino UK website shows that the Singles CD Box Set used the Frank Arkwright/Johnny Marr remasters (here) and one of the main selling points of The Sound Of The Smiths was that it used Johnny Marr approved (re)masters.

The Truth Is Out There

But what about the remasters that Stephen Street did with Johnny Marr? I'm very curious to hear these ... I hope they are better than the Frank Arkwright remasters.
D

Egosheep YOU ARE THE BEST!!! THANKS!!!

No One You Know

Are these the same as the discs that I bought from Japan?
PENISMIGHTIERTHANTHESWORD
E

Oso Blanco said:
But what about the remasters that Stephen Street did with Johnny Marr? I'm very curious to hear these ... I hope they are better than the Frank Arkwright remasters.
Click to expand...

I don't think I have heard of these, yet. I read an article about the Arkwright ones, though.

The Japanese CD's are from 2006, they are a different remaster. You can get them online in lossless.
http://www.smithsonguitar.com​
R

I procrastinated getting the reissued Smiths LP's from last year until last week. My UK and Japanese Smiths vinyl sounds damn good. I caved last week and ordered the imports from Amazon.de because, believe it or not, they were cheaper than the US Rhino issues. They also came with 320 kbps downloads of each album. I thought it would be novel if these downloads were the remasters that Johnny Marr oversaw, as I'm not aware of digital versions of the remasters being officially released.

It turns out they ARE the entire albums remastered, and a comparison with my best cd copy of each of the 4 albums, shows a fantastic improvement in the sound. The bass is wonderful and sounds like a live electric bass, now. The high end is much less digital, more delicate, and airy. They are not over compressed like the new Bona Drag reissue.

I'm curious if these downloads the only place to get the remastered albums. I understand itunes has the albums available now and wonder if anyone has compared these to any old versions of the albums.

If iTunes (or other digital sites) has remastered versions, they are worth it for the great sound, if you're into that kind of thing!

I'm kind of just guessing here, but I would think the versions available from iTunes etc are the same old versions, and not the remasters, seeing as how the remastered LPs are more of a novelty/special interest type thing than a new general release. But what do I know. Either way, there are vinyl rips available here and there around the web.
yes, you're older now
and you're a clever swine
but they were the only ones who ever stood by you
You must log in or register to reply here.

B
Different mixes and edits of The Smiths and Morrissey songs