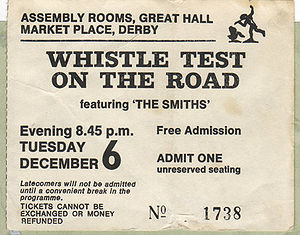 The actual date this concert occurred has caused some confusion. From first person accounts[1] as well as the tickets stub included with this article, the concert is listed here as occurring on 6 December, 1983.

"This concert was a very wild one, the crowd was very energetic and constantly shouting requests. It all ended in chaos (read further). After shushing the audience, "Pretty Girls Make Graves" was introduced with "A little quirk... a little quirk friends... pretty girls make!" During "Reel Around The Fountain", Morrissey gave one of the bead necklaces he was wearing to someone in the crowd. In "What Difference Does It Make?", he changed a line to "I think i can rely on me.

"At some point during "Miserable Lie", Morrissey was hit in the eye by a flower, dropped his microphone to the floor and left the stage. The band finished the song mostly as an instrumental. Morrissey came back on stage on time for the ending of "I need advice, I need advice", adding at the end "and so do you!" for the rowdy audience. He remained playful despite this, but Johnny Marr later said in interview that this was his most embarrassing moment. Actually in the 1985 programme for the Meat Is Murder tour, he said this concert was his 'greatest embarrassment'.

"Just before "This Night Has Opened My Eyes" which came next, Morrissey shushed the audience again and shouted "No! This!" In the song Morrissey changed a few lines, like "this night has opened my eyes and I will never see again", "The dream has gone, the crying is real" and "And I'm never happy and I'm never sad." "Hand In Glove" was introduced by a high pitched shout of "Hand In Glove!!!" During that song someone made it on stage and hugged Morrissey, making him miss a few lines. After "These Things Take Time", Morrissey just shouted "Goodbye! Stay handsome... goodbye..." and the band left.

"They were soon welcomed back by a big collective cheer. They launched into "You've Got Everything Now" but it wasn't long before the stage became crowded with fans. Band members disappeared from view and Morrissey could barely sing his lines. He tried as best he could but made strangling noises as he was pulled left and right and tried not to get drowned in a sea of dancing fans. The stage got filled with as many fans as was physically possible. It was one of the Smiths' first major stage invasions (including a small child!)."[2]

"This concert was recorded for The Old Grey Whistle Test and first broadcast the following Friday and Saturday. Some later rebroadcasts were shortened to seven songs, leaving out amongst others, the near-instrumental "Miserable Lie"."[3]

Portions of this concert have been released on the following bootlegs: Boyfriend In A Coma bootleg LP, The Smiths Hang The DJ (Thrice!) bootleg LP, the From The One You Left Behind bootleg CD, the Shoplifters From Manchester bootleg CD and the Wilde About The Smiths Unlimited Rarities bootleg CD.

Lossless versions of the complete concert and the audio and video broadcasts is available at Smiths Torrents. MP3 versions are available at the usual places.